Imagine yourself walking along an old forest trail on a sunny summer evening in eastern Norway. After a while, you notice the trail is slowly fading away into the undergrowth. Suddenly you are confronted by the landscape that lies beyond well-trodden paths. To continue walking you have to follow something other than the trail, such as ridges, moraines, animal trails, while traversing dried out creeks and other natural formations. Because of your new considerations of the landscape, you are not just walking past it, but in it. Unexpectedly, on the top of the serpentine back of an esker, you are halted in your steps. An odd circular pit in the terrain partly blocks your way forward. At first, it looks like a miniature meteorite crater, but it is something else. It is dug by human hands, but the handiwork is covered in moss and heather. You step down into the crater, plunge your hand into the mossy soil and wriggle your fingers to reach under the sod. You pull your hand out of the soil. The fingertips are stained black. The unexpected pit you discovered is a production site for charcoal, perhaps dating as far back as the Iron Age.

Surveying for Stone Age settlements on the shores of the Rødungen lake in the mountains of eastern Norway. Photo: Stein Farstadvoll 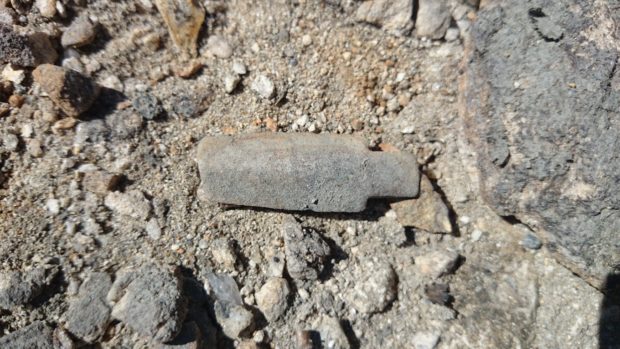 A Neolithic arrowhead of slate missing its tip. Discovered while surveying the shores of the Rødungen lake. Photo: Stein Farstadvoll

How does an archaeologist carry out a surface survey? There are many different approaches, such as using ground penetrating radar, maps, aerial photographs or even 3D models of the terrain. However, I want to emphasize the walking aspect of it, the simple act of moving within a landscape, observing and experiencing it with the help of no particular tools or instruments. The surface survey and the walk are important aspects of how I approach things in my own research.

The past on the surface

A lot of our heritage is visible above ground. Of course, there are things hidden in the soil, but there are also many objects poking through and shaping the surface of our modern world. One example of such things is the charcoal pit as described at the beginning of this post. Large burial mounds and clearance cairns are other examples of ancient structures that today are still out in the open. A lot of our present world is built beside, on and of things from the past. A good example of this is the farm mounds in northern Norway. These large mounds are the construction/destruction debris and garbage accumulated through centuries of human habitation. Recent archaeological heritage such as German bunkers from WWII are markedly visible, so much that they even are considered as eyesores by some of us. Yes, it is true, archaeology also investigate heritage from our own time and the recent past.

Traces of big structures are not the only archaeological things that blanket the surface of our modern world. With a walk and an observant eye, you can also discover smaller objects too. Such things can be anything from Stone Age arrowheads, potsherds, spent cartridges from the Second World War, to Iron Age glass pearls. You do not necessarily need a metal detector to spot archaeological artifacts in a field or along the edge of a ditch.

How do archaeologists discover things that other people overlook? Of course an archaeologist gain knowledge about things through his or hers education. We learn how to identify ancient stone tools and the debris from the production of such tools. We know about how and not least where people used to live. We use large typological charts to attribute artifacts to and date ancient cultures. However, the most important thing we learn is the simple task of looking closer at our surroundings. Archaeologists read the landscape for artifacts and structures concealed within it. While biologists look for specific plants and animals, archaeologists look for the human made. 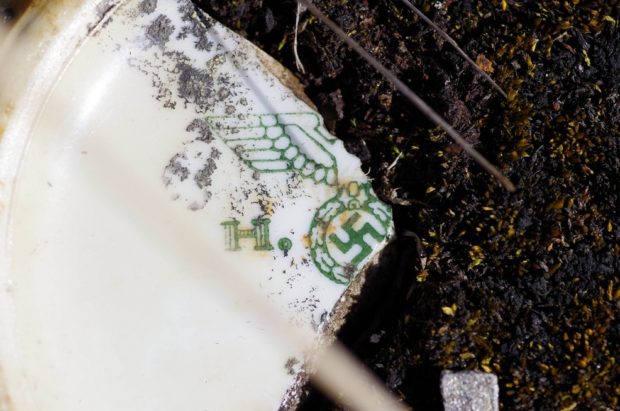 A fragment of a Nazi tableware produced by the “Bohemia” corporation. The piece was found on the surface of a burnt out building foundation at Sværholt in Finnmark. Photo: Stein Farstadvoll

One might ask what the point is of going for a walk when we can just as well look at artifacts at a museum or read a book. One answer is that we do surveys to discover new things. However, there is more to this than just creating catalogues of discoveries. The archaeological walk is not only about walking from point A to point B gathering data on the way, rather it is about thinking with both your head and feet. There is a difference in investigating a place through your computer screen, compared to experiencing a place yourself by moving within it. The most alluring aspect of archaeology is that our primary source material is concrete things you can touch, see, smell and sometimes even hear.

Walking amongst the ruinous foundations and traces of a prisoner of war labor camp from the Second World War in Finnmark is a great example of an immersive experience. Not only do you get close to the place where the prisoners spent a lot of their time, but you also can personally experience the harsh weather and landscape they had to live with. Even if you do not completely understand an archaeological site, you can certainly experience it. Experience is a different form of understanding you do not gain from reading books.

The goals of an archaeological walk do not necessarily need to be ruins and artifacts from a distant past, but can also be forgotten and hidden things from our own age. Our world moves at a lightning fast pace. We are constantly developing new technologies, new houses, and new everything. Moreover, as we create new stuff, we leave a lot it behind. An old “pull tab” from a soda can might be a strange and foreign object for youth to discover today, even if they went out of use just 35 years ago. In my research, I investigate an old landscape park that was abandoned in the 1950s.

Archaeology so soon! Far from everything from our time is self-explanatory, even in a modern world filled to the brim with information and text. There is always something begging for questions and rediscovery. Such things can be everything from abandoned shopping malls, car cemeteries, schools to mines. With a walk, we are given the opportunity to stumble upon structures and artefacts that have the potential to tickle our curiosity. 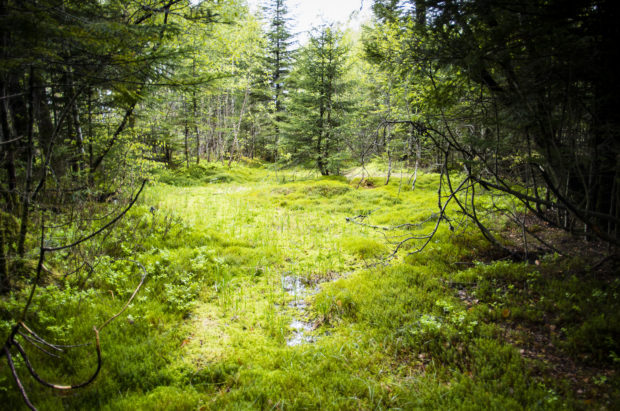 A picture of the overgrown pond named “the mountain lake”. The pond is located in the Retiro landscape garden in the city of Molde. The garden was built in 1874 and abandoned in the 1950s. Photo: Stein Farstadvoll

At the journeys end

To most of us, especially us Norwegians, the idea of going for a walk or hike is quite familiar. Popular destinations range from nice lakes to mountaintops with grand vistas. Archaeology is one of the privileged academics disciplines that involve a lot work outside the office. However, the “archaeological walk” is not something limited to archaeologists. It only requires you to take inquisitive detours, sometimes off the beaten path. The destination of the archaeological walk is the past, but not the past as in a distant unreachable place, but rather as concrete things that are a part of our present world.

Instead of reading about Vikings, you have the possibility to encounter things from their world just by taking a walk. A Sunday walk can be enriched by being just a little bit more inquisitive about the landscape you are moving through. Perhaps the unassuming grassy knoll you have walked by hundreds of times, can with a small detour from the trail reveal itself to you as an ancient burial mound? Alternatively, some ditches in your back yard can be discovered to be German trenches from the Second World War. Simply asking “what is this?” will lead you to surprising answers or new and unexpected questions.